Often, women bear the brunt of the fertility treatments and testing. They undergo hormone treatments and what seems like ongoing, often invasive procedures. At the same time, however, many men also suffer from fertility issues that can significantly impact a couple's ability to get pregnant. With special male testing, you can help better identify what issues a man has that could contribute to fertility challenges--and a semen analysis alone may not be enough to do it!

Sperm count and sperm motility remain two of the most useful indicators of a man's fertility potential. Additional tests, however, can be used to evaluate sperm capability and recover the healthiest sperm for fertilization.

A routine semen analysis can provide important information about male fertility, most notably sperm motility and concentration. It does not, however, reveal information about the integrity of the sperm's DNA. Several factors can damage sperm DNA:

Research has shown that broken DNA in sperm does not disperse after acid denaturation. Normal sperm DNA, on the other hand, disperses after special acid treatment to produce a halo of DNA chromatin around the sperm head--a clear picture that is easy to identify. The Halosperm test makes clear use of this property.

The Process: First, sperm are exposed to a colored agent that stains the DNA within each sperm capsule. Then, acid treatment makes the sperm membrane leaky. DNA is released quickly through the leaky membrane, almost like a coiled spring that has suddenly been released. If the DNA coil is broken, on the other hand, it won't leak as readily through the sperm membrane, often remaining within the sperm head.

Checking the Results: During the Halosperm test, sperm that do not show the sperm halo are assumed to contain broken DNA. If 30% or more of the sperm in the sample contains fragmented DNA, the sample is considered abnormal. Couples then have a foundation for understanding what could cause their fertility problems and can then make decisions accordingly.

Most commonly, motile sperm are isolated from a semen sample through gradient centrifugation. First, fresh semen is washed and spun in a test tube. The most active sperm can then swim through the layer of filtering media. This method, however, ignores several of the natural barriers that sperm go through on their way to successfully fertilize an egg.

Now, there's a new method that can help improve sperm selection, allowing fertility specialists to get the best sperm out of each sample. Microfluidics technology offer exciting new methods that can improve sperm selection. With microfluidics, minute amounts of fluid are able to pass through microchannels that measure less than a milliliter in diameter. Through these narrow channels, fluid flows at an even pace. The particle it carries can be carefully separated according to their unique characteristics.

In many industries, microfluidics can be used to separate suspending particles within a fluid. Now, it's making its way into fertility clinics, making it possible to select the best sperm from a semen sample to fertilize the egg. With the best sperm, there is an increased chance of successful pregnancy and a decreased rate of birth defects.

The Technology: ZymotTM is a newly-available commercial kit that uses microfluidic technology to sort sperm. First, a fresh semen sample is collected. Then, the semen is pushed gently into a chamber. Sperm are allowed to swim through a filter membrane that contains micropores. Eventually, the sperm able to pass through the membrane are collected and used for fertilization.

More Like Nature: Using microfluidics comes closer to allowing science to mimic the process nature uses to choose the best sperm as they swim through the female reproductive system. During natural conception, sperm must swim through the microchannels of the cervix, uterine lining, and tubes before they can meet the egg at the end of the tube. By using microfluidics, fertility clinics can sort sperm almost as effectively as nature.

The Benefits: Microfluidics technology offers a number of key advantages: 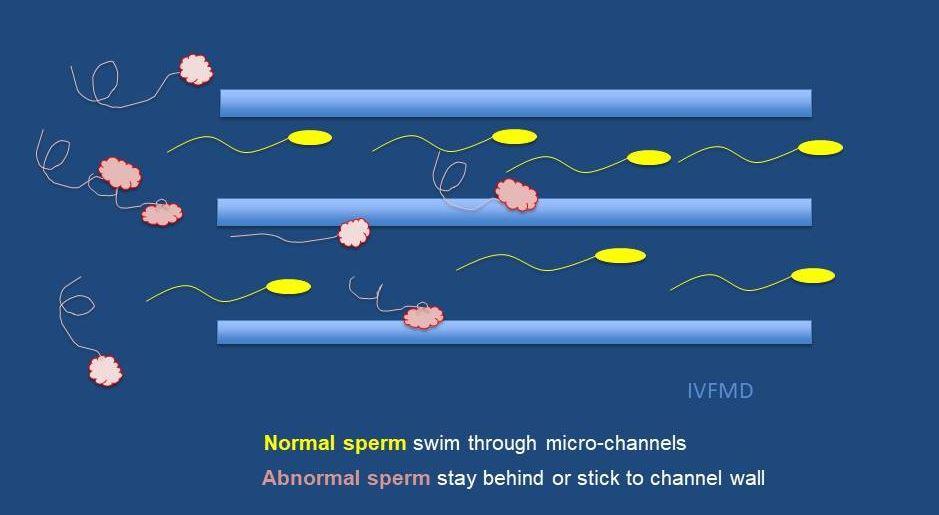 All of these characteristics make the sperm a better fit for fertilization. At IVFMD, men who have sperm with high DNA fragmentation, shown through an abnormal Halosperm test, or sperm with severely abnormal morphology can benefit from this type of testing.

Microfluidics technology can help select optimal sperm as they move through microchannels. In some cases, however, it might not offer optimal support for all fertility problems--especially in the case of severe sperm hypomotility. Sperm can be viable and healthy but lack the ability to swim forward--especially if they are extracted directly from the testes.

In standard ICSI, sperm with normal appearance are arbitrarily selected for injection into the egg. ICSI can improve the rate of fertilization in case of low sperm count or motility, but it cannot ensure delivery of sperm with functional competency or determine whether they carry intact DNA. Sperm may look perfectly normal, but fail to fertilize or have fragmentations in its chromosomes that can lead to the formation of an abnormal embryo, which can increase the rate of miscarriage or the potential for birth defects.

Natural Conditions: Under natural conditions, sperm must bind to a protein called hyaluronan on the surface of the egg before the egg can be fertilized. Studies show that sperm able to bind to the hyaluronan tend to be mature and have a higher likelihood of containing undamaged DNA. In ICSI, however, this process is often bypassed.

How PICSI Can Help: PICSI helps select the best sperm for the ICSI process. It mimics the natural selection process that occurs during natural fertilization.

The Process: First, sperm are added to a Petri dish with a small circle coated with hyaluronan. After a period of incubation, the unbound sperm are washed off to reveal the sperm that adhered to the hyaluronan surface. The bound sperm are then used for the ICSI process, since they are more likely to lead to a successful pregnancy.