Standard in vitro fertilization (IVF) doesn’t always overcome issues of infertility. The medical professionals at IVFMD understand that successful IVF requires an individualized approach. To give you the best opportunity to become pregnant, they’re willing to work outside the box when necessary. These dedicated specialists offer aggressive IVF protocols at all three IVFMD locations in Irving, Grapevine and Arlington, Texas, for patients who aren’t suitable candidates for standard procedures. For more information regarding your IVF options call IVFMD today for an appointment or try their convenient online scheduling service.

Not all patients will benefit from the standard IVF protocols. While Lupron and birth control pills (BCP) help recruit multiple follicles by preventing natural selection of a single dominant follicle, each can suppress ovarian response, especially when used together during the pre-stimulation phase.

Patients with low ovarian reserve will do better using regimens that minimize the inhibitory effects of Lupron and birth control pills (BCP). At IVFMD we use a variety of aggressive protocols to optimize ovarian response. When choosing a protocol for patients with low egg reserve, the experience, creativity and flexibility of the physician contribute greatly to the chance of success. Listed below are the protocols that we have used effectively over the years:

In the regular IVF protocol, Lupron and BCP are used for at least 2 weeks before ovarian stimulation. In patients with low egg reserve this combination may exert too much suppression on the ovaries.

The Microdose Lupron regimen uses a very small dose of Lupron just 3 days before the start of stimulation medications to minimize the suppressive effect and to take advantage of a unique property of Lupron to release FSH and LH from the pituitary gland, which are the same hormones found in the stimulation medications. Thus during the first few days of Lupron, the ovaries are stimulated by the natural pituitary hormones (the flare effect). Medications containing the same hormones are later added to augment the stimulation effect. 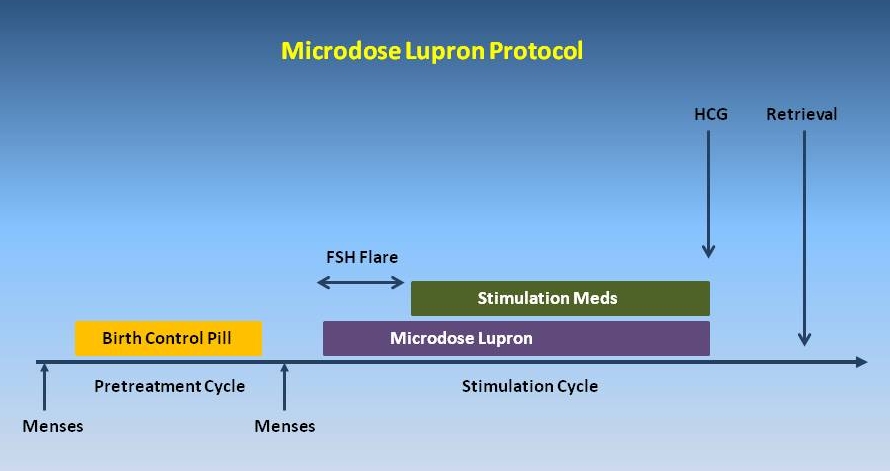 The micro-Lupron protocol was one of the first aggressive protocols introduced and over the years has helped many patients with low ovarian reserve to conceive their own children without resorting to donor eggs. Its main disadvantage is that LH is also released along with FSH which can potentially impair egg development. There is also an increased risk of premature ovulation due to the light suppression of the pituitary. In addition, patients with very low egg reserve (AMH < 0.5ng/ml), can still significantly suppress the ovarian response with short term use of BCP.

This protocol is our favorite for patients with very low ovarian reserve or those who have poor response after taking BCP. In this protocol the pretreatment cycle is a natural cycle (no BCP). About a week after ovulation a GnRH antagonist (Ganirelix or Cetrotide) is started to prevent premature recruitment of follicles, an effect often seen in premature aging ovaries. In addition, estrogen is used to provide the young follicles an optimal condition to grow in the future. Stimulation medications are stated on day 3 of the next menses and the antagonist would be used again later to prevent premature ovulation. 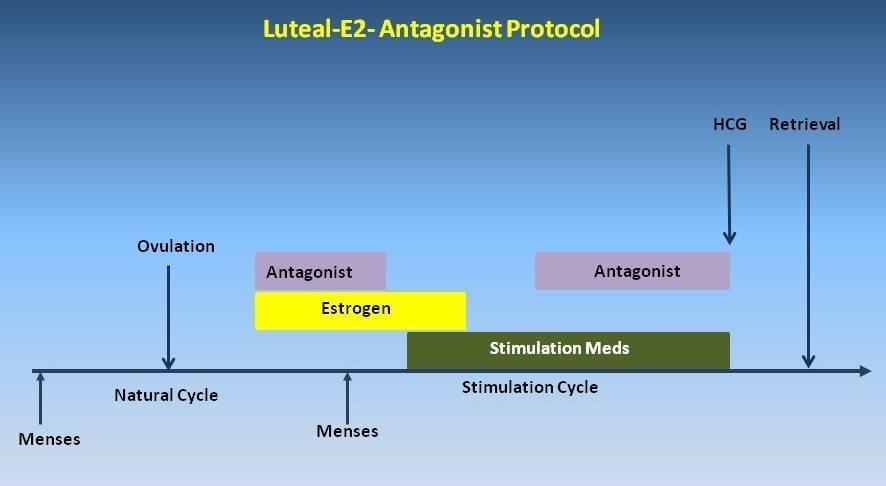 At IVFMD this is   currently our favorite protocol for patients with very low egg reserve (AMH < 0.5 ng/ml or total antral follicle count of 5 or less.) It avoids the suppressive effect of Lupron and BCP on the ovaries. In addition, the use of estrogen during the pretreatment cycle prevents premature recruitment of follicles that can reduce the number of follicles available for stimulation. Studies have shown that this protocol allows a more coordinated growth of follicles to give better embryo quality and quantity. The main disadvantage of this protocol is the lack of flexibility in planning the cycle since ovarian stimulation can occur on any day.

We introduced this protocol to improve on the microdose Lupron flare protocol. We reserve this protocol for patients who do not respond well to the E2-Antagonist program. The pretreatment phase is a natural cycle in which estrogen is given for 7 days a week after ovulation. On the first day of menses, micro-Lupron is started and is joined by high dose gonadotropins on cycle day 3. The E2-microlupron protocol avoids the suppressive effect of BCP while taking advantage of the effects of estrogen in preventing premature follicle recruitment and in sensitizing follicles to stimulation. It also provides the flare effect of micro-Lupron to maximize the ovarian stimulation. At IVFMD several patients with AMH of 0.1-0.3 ng/ml had conceived using this special protocol. 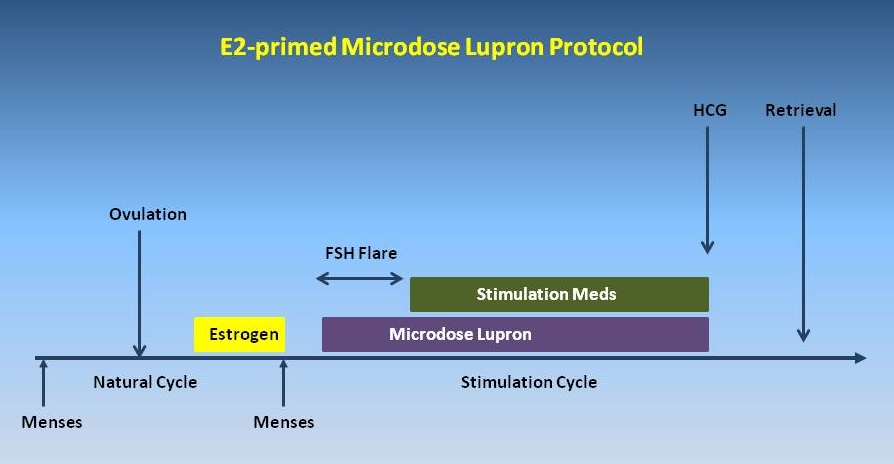 And finally, a protocol for patients who had failed to respond to all previous protocols due to extremely low egg reserve (AMH of < 0.3 ng/ml but with at least 3 antral follicles). In this protocol there is no pretreatment cycle. As soon as the baseline sonogram shows at least 3 antral follicles, ovarian stimulation begins immediately using a combination of Femara and high dose gonadotropins (FSH and HMG). Femara indirectly induces the release of FSH and LH from the pituitary gland by blocking the synthesis of E2. The combination of pituitary LH and FSH and those from the medications provides very potent ovarian stimulation. After 5-6 days of stimulation an antagonist is added to prevent ovulation until the day of HCG trigger. 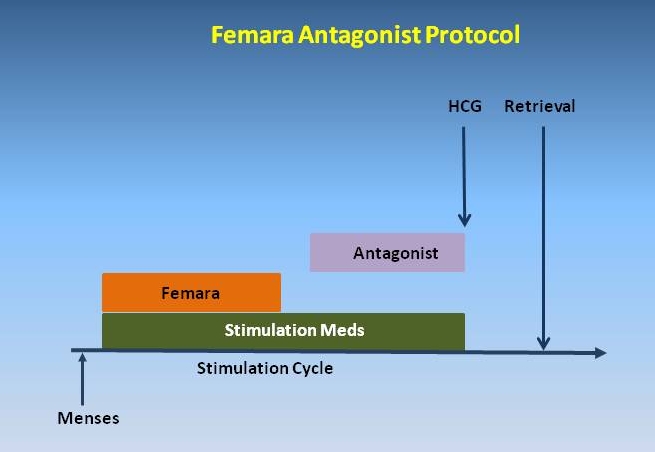 The disadvantage of this protocol is the delayed endometrial growth caused by 5 days of Femara but this effect can be overcome quickly with vaginal estrogen supplementation on the last day of Femara. Another disadvantage is the lack of flexibility in cycle planning as there is no way to plan ahead the start of ovarian stimulation. However, for a patient who desires a last chance to use her own eggs, this protocol gives her a final opportunity before closure and moving on to donor eggs.

The main advantages and disadvantages of IVF protocols for low ovarian reserve are summarized in the following table:

The above protocols have helped many patients at IVFMD with low ovarian reserve to conceive their biological children. Each regimen has its own advantages and limitations, and patients respond differently to them. The patient must remember that no protocol can allow her to make more eggs than her ovaries can provide in a cycle, and that no protocol can reverse the negative impact of time on the quality of her eggs.