Intrauterine insemination (IUI) is an effective infertility treatment for certain conditions and it’s surprisingly low in cost when compared to other procedures such as an in vitro fertilization (IVF) cycle. The fertility specialists at IVFMD, with facilities in Irving, Grapevine and Arlington, Texas, are dedicated to providing you with state-of-the-art fertility treatments that are both effective and affordable. To determine whether IUI is right for you, call the center today for an appointment or use their online scheduling service.

What is IUI or Intrauterine Insemination?

In planning treatment for infertility, your doctor may recommend IUI as part of the treatment plan. So what is IUI or intrauterine insemination?

Intrauterine insemination (IUI), also called artificial insemination, is a procedure in which concentrated motile sperm are deposited into the uterus through a soft insemination catheter. 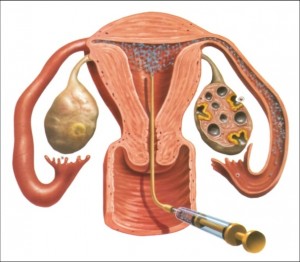 Fresh semen is first washed and spun in a test tube to allow the most active sperm to swim through a layer of filtering media. The resulting pellet at the bottom of the tube that contains mainly motile sperm is then resuspended in a special fluid to invigorate the sperm and make them ready for intrauterine insemination (also called IUI or artificial insemination.

IUI pregnancy rates are optimal when at least 3 million motile sperm are available for insemination after semen processing.

Intrauterine insemination can improve the chance of fertilization in 2 ways- by shortening the distance sperm have to swim to meet the egg and by increasing sperm survivability.

Ejaculated sperm are usually a mixture of fast and slow moving sperm. Some sperm are able to move forward and efficiently while others can only wobble, move in circles, or not move at all. Nonmoving sperm can clump together to form a ‘sperm trap’ that can attract motile sperm and impair their ability to get into the uterus.

Sperm washingfor IUI recovers sperm that actively swim forward to ensure smooth traffic toward the egg. Millions of motile sperm are placed to the top of the uterus next to the openings into the fallopian tubes. By depositing sperm beyond the cervix and shortening the distance sperm have to travel to meet the egg, artificial insemination improves the odds of fertilization. 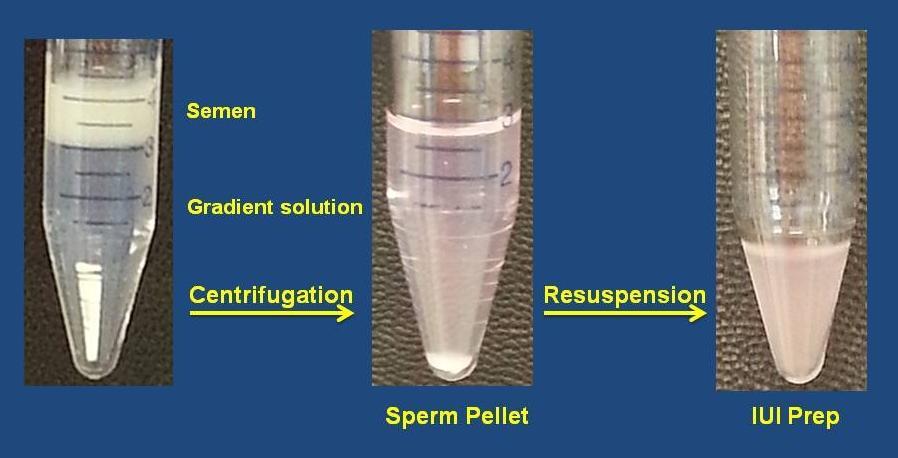 Artificial insemination can help improve the chance of pregnancy by prolonging the survival of the sperm by avoiding the vaginal environment.

Normally, the pH of the vagina is slightly acidic to prevent growth of yeast and bacteria and keep it healthy. Unfortunately, sperm dislike an acidic environment and very few of them would survive after an hour in the vagina. In contrast, once in the cervix and the uterus, sperm is can survive for as long as 3-4 days.  By avoiding the vaginal route, the IUI procedure can improve the chance of fertilization.

What Are the Pregnancy Rates of IUI Cycles?

Success with IUI depends on many factors including the woman’s age and the severity of sperm abnormalities. In general, a cumulative pregnancy rate of about 50-60% is expected after 5 IUI attempts in uncomplicated cases.

There are many steps that lead to implantation, and many of these cannot be evaluated in an IUI cycle. For example, there can be adhesions in the pelvis that prevent the tubes from picking up the egg after ovulation.

Endometriosis in the pelvis can cause scarring of the pelvis and produce inflammatory factors that can damage the integrity of the egg before it has a chance to meet the sperm.

Even if the egg is fertilized normally, the embryo may stop developing while in the tubes due to abnormal cellular division.

In short, the IUI pregnancy rates can only be slightly better than the natural live birth rate offered by Mother Nature which is 10-15% per cycle. No fertility clinic of the Dallas Fort Worth area can consistently claim IUI live birth rates of higher than 15% per cycle.

For the same IUI success rates of 10-15% per cycle fertility clinics of the Dallas, Fort Worth area can differ widely in their costs of IUI, ranging from a few hundred to several thousand dollars excluding medications. It might be a good idea to ask a clinic how much it charges for an IUI cycle when choosing where to go for fertility treatment.

What Is the Cost of IUI?

For cost of IUI has a major advantage over IVF. The cost of IUI cycle is much less than that of an IVF cycle and can vary depending on whether other treatments are also required.

The cost of an artificial insemination or IUI cycle in the Dallas Fort Worth area depends on a number of factors.

The least expensive IUI cycle involves a natural cycle in which an ovulation kit is used to detect the LH surge. Insemination is typically performed on the day following the LH surge.

The use of oral medications to induce ovulation requires sonogram monitoring. Here, the total cost depends on the number of sonograms performed and the hormone tests sent. Within the Dallas Fort Worth area, fertility clinics differ widely in their requirement for sonograms and blood work.

For IUI cycles using oral medications, higher costs from frequent sonograms and blood tests do not mean better results. Many studies had shown that the maximum chance of live birth of an IUI cycle using oral medications is 10-15%. In other words, clinics that charge thousands of dollars for these IUI cycles do not necessarily have better outcomes than clinics that charge much less.

When deciding where to have the IUI treatment, it might be wise to look at the total cost of the IUI cycles charged by fertility clinics, which all ultimately result in the same 10-15% of live birth rate per cycle.

By conducting IUI cycles efficiently, the cost of IUI cycles at IVFMD fertility clinics in Irving, Grapevine and Arlington are among the most affordable in the Dallas Fort Worth area. 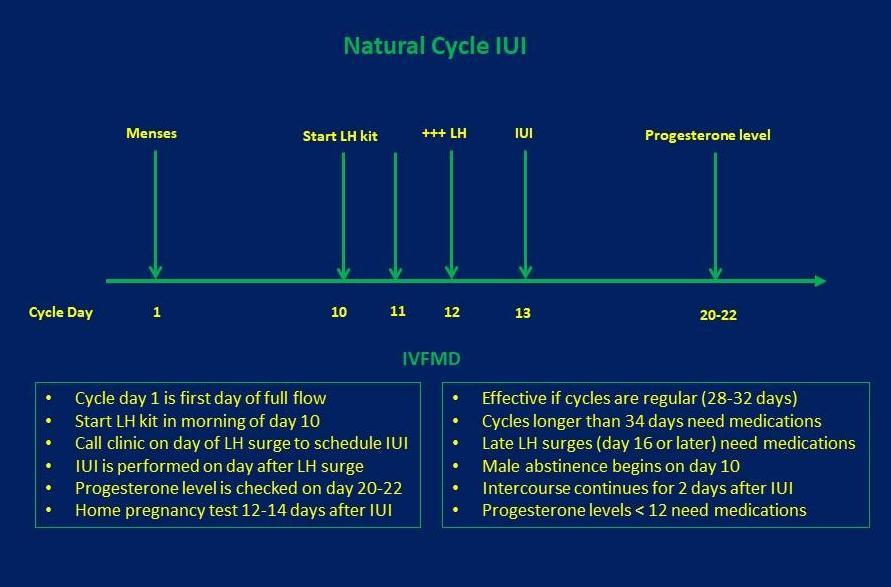 What Are the Treatment Options for IUI?

In the Dallas Fort Worth area, fertility clinics can provide artificial insemination in a natural or a medicated cycle using fresh sperm from the male partner or anonymous donor sperm acquired from a sperm bank.

Natural cycle IUI can work well if the woman has regular cycles. Counting from the first day of full flow (cycle day 1), a normal cycle should last between 28-32 days.  Women with cycles that are longer than 32 days should use ovulation induction medications to optimize their chance of pregnancy with IUI.

Starting on cycle day 10, a urine ovulation predictor kit (Clearblue) that detects the release of LH (ovulation signal from the pituitary) is used until the test becomes positive.

Ovulation induction medications are necessary in women with irregular or long cycles to optimize chance of pregnancy with IUI.

Oral medications are used for 5 days early in the cycle to improve follicular growth and ensure timely ovulation.

In some cases injectable medications might be added to provide more powerful stimulation to the ovaries to optimize ovulation before the IUI procedure.

In medicated IUI cycles, sonograms are required to monitor growth of the follicles. At the appropriate time, an injection of HCG is used to ensure ovulation, and artificial insemination is usually performed 24-36 hours after the ovulation trigger.

What Are the Limitations of IUI?

While the relatively low cost of IUI offers a major advantage over IVF, there are limitations of artificial insemination.IUI treatment would not be effective in the following situations:

Semen samples with lower sperm count or motility may not yield enough motile sperm that migrate to the bottom of the tube to create a visible sperm pellet, thus making the IUI procedure impractical.

IUI pregnancy rates are more likely to occur when at least 3 million motile sperm are available for insemination after processing. The success rates of IUIdrop significantly when the total motile count is less than 1 million.

Severely Abnormal Sperm Morphology: To optimize IUI success, sperm count and motility are the most important sperm parameters to consider.

Abnormal sperm morphology, although not so critical in most cases, may at times reduce IUI success if most of the sperm have pin head (microcephaly) or round head (globospermia) which have been associated with genetic defects and fertilization failure.

In addition, sperm with a small acrosome region may not have the necessary enzymes to penetrate the zona shell of the egg to make fertilization happen.

With these types of severe sperm morphology, ICSI in an in vitro fertilization cycle can offer a higher chance of success due to the ability to inject the best sperm into the egg to optimize the chance of fertilization.